The good news for those of you just itching to accessorize your new locks is that there is NO wait! But, there is a trick to making sure you’re wearing them the “right” way to make sure that you don’t unintentionally cause any damage to your dreads!

Before I explain to you the “right” way, we have to give you a quick break down of what three things create mature, matted dreadlocks; Friction, compression, and time. Anything you do to increase friction or compression (palm rolling, clock-wise rubbing, etc.) helps to speed along the process. Conversely, anything you do that minimizes or eliminates friction and/or compression slows or can even halt the locking process in its tracks and can lead to weak spots in your locks if this occurs before your dreadlocks are completely mature.

That said, there are two “types” of dread wraps; solid thread wraps (the dread at the far left in the image) and open (also called criss-crossed) wraps. When you place a tight, solid wrap on a less-than-mature dreadlock, it compresses the dreadlock, but it also eliminates any friction which, again, halts the locking process and causes weak spots. Solid thread wraps should only be placed on completely solid, mature dreadlocks. 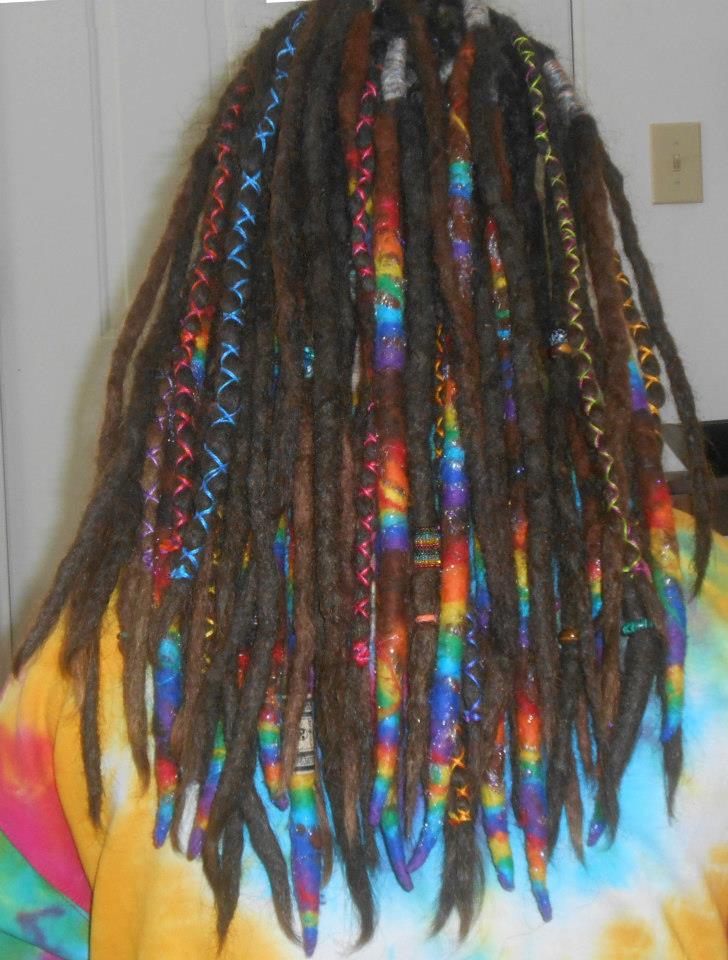 Criss-cross wraps, on the other hand, which are an open weave can be safely worn on dreadlocks of any age. Because they compress the dreadlock but also allow for friction they can be both functional (to help accelerate the locking process) and aesthetically pleasing. However, open wraps should be placed relatively loosely (so that it doesn’t visibly “choke” or squeeze the dreadlock) for the best results and the healthiest possible dreads. (Photo at above left and right shows examples of properly placed open string wraps.)

Likewise, beads that are too tight for your dreadlocks can create weak spots as well. Just like wraps, as long as they are properly sized they can be worn as soon as your dreadlocks are “born”! Beads should be snug; tight enough that they stay put and won’t fall off the dreadlock if you shake your head around, but loose enough that you can slide them around. In fact, sliding them around is good to do after washing to make sure underneath gets properly dry to prevent mold.

For dreadlocks that are NOT started professionally or that may be significantly smaller or less compacted, you should tread carefully when it comes to adding beads. Beads that fit when your dreadlocks are younger and newer can sometimes end up being far too small once your locks begin to mature and fatten up. Beads should always be loose enough to slide around as stated above, and should CONTINUE to do so for the duration you wear them. So, it’s a good idea to be prepared for the possibility that beads that fit when your dreadlocks are new, may need to be removed and replaced with larger beads once your dreadlocks become more established.


Disclaimer: The advice and suggestions on this website are not intended to replace the medical advice of a licensed doctor or dermatologist. Please consult a medical professional for best results.
Email Us!
text only - (860) 874-6660

All Services By Appointment Only!